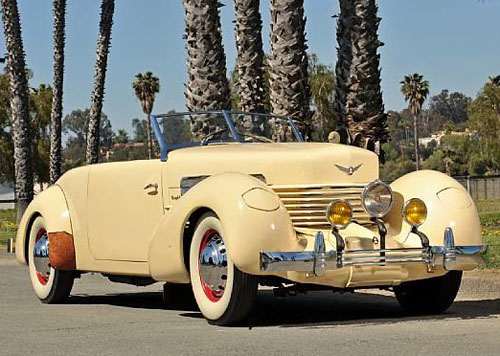 The 2012 Amelia Island Concours d’Elegance will be held March 9-11 on the 10th and 18th fairways of The Golf Club of Amelia Island at Summer Beach adjacent to The Ritz-Carlton, Amelia Island.

Now in its second decade, the Amelia Island Concours d’Elegance is among the top automotive events in the world.

Tom Mix was one of America’s first cowboy movie stars and known as an original Hollywood good guy in the white hat.

On October 12, 1940 – Tom Mix crashed his supercharged Cord in a construction zone on Arizona Route 79. The Cord was capable of over 100 mph and Mix had been traveling nearly 80 mph and missed the signs saying “BRIDGE UNDER REPAIR”.

Now owned by Bob White of Scottsdale, AZ, Mix’s Cord is one of only three with a rare set of options, including an external-mounted spare. The other two belonged to jazz singer Al Jolson and actress Barbara

“The 812 Cord is rare, technologically advanced and extraordinarily desirable,” said concours founder and Chairman Bill Warner. “The Tom Mix Cord is the most famous of the breed. It’s a true ‘destination car’, the kind that hard core classic car enthusiasts will travel hundreds of miles to see.’