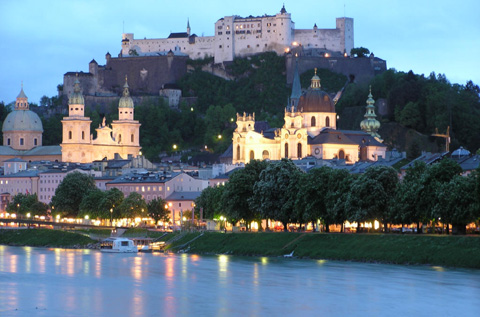 Salzburg Castle in or better known as Festung Hohensalzburg or Hohensalzburg Fortress in Austria, is the mightiest fortress of Central Europe.

This powerful castle sits in a prominent position, as Salzburg Austria’s prime attraction and most dominant feature of the city’s skyline. The historic Salzburg Castle should not to be missed during any visit to Salzburg.

The first record of a fortification on the southern side of the Mönchsberg Mountain dates back to Roman time, but this is not certain. However, it would make sense: from the position of Hohensalzburg Castle one can see the surroundings of Salzburg and the Salzach river better than anywhere else in the entire city.

Prince Archbishop Eberhard (1060 to 1088) built the first castle on the Festungsberg in 1077. Initially, this was little more than a bailey with a wooden wall, serving mostly for the protection of Imperial troops of the Holy Roman Empire. However, during the “Investiturstreit”, a struggle for power between Pope Gregor VII. and Emperor Henry IV., Prince Archbishop Eberhard decided to stand by the Pope.

After 1933, Salzburg became one of the areas in Austria that were most fiercely targeted by Nazi underground terrorists, many of them exiled Austrians themselves, fighting for a union with Nazi Germany.

When some Nazis launched an attack in Lamprechtshausen near Salzburg, they were imprisoned in the fortress in 1934. This was the last time that Hohensalzburg Castle held prisoners. In more recent years, Hohensalzburg was renovated extensively and so looks into a shiny future.