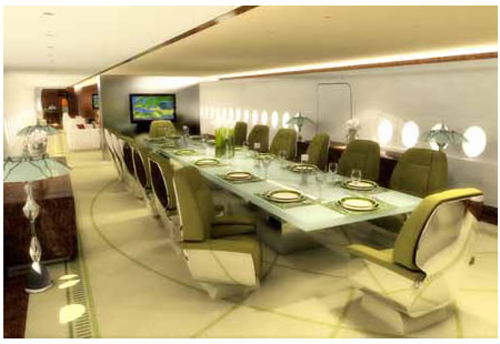 But there’s one segment that’s flourishing like never before – private jets.  We’re not just talking about the sleek small versions, but these are commercial size aircraft that typically hold hundreds of passengers. These jets are now being customized and converted into luxury life-style playgrounds for the rich and famous.

“Money is not a problem,” said Tillman Paul, a designer with Jet Aviation in Switzerland, one of the largest firms for custom aircraft interior design.

Unlike conventional airlines concerned about fuel prices and a weakening economy, the luxury aircraft industry is fashioning aircraft into mansions in the sky.

Flush with cash from the greatest oil boom since the 1970s, Middle East patrons are increasingly spending their wealth on private aircraft. The number of millionaires in the UAE grew by 15 per cent in 2006 to 68,000, while Saudi Arabia topped 90,000, according to a recent study by Merrill Lynch, the investment bank, and Capgemini, a consulting firm.