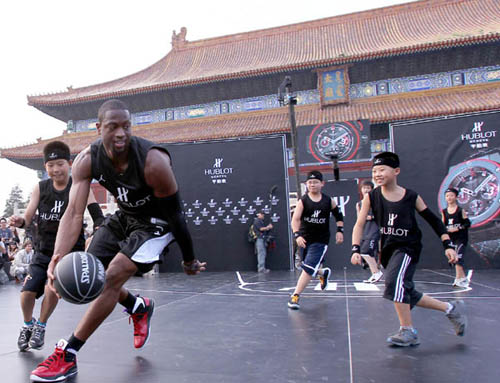 Jet Li, is Beijing-born and International Hublot Ambassador, One Foundation was founded in 2006 and its mission is to promote a culture of broad-based participation in philanthropy and giving.

Dwyane Wade’s challenge was to score a maximum of baskets, with each basket corresponding to a sum of money ($50K, 100K etc.) and on an increasing scale of difficulty and winnings.

All of the charity’s collected funds collected will be donated to the leading non-profit organization One Foundation on behalf of Hublot and Wade’s World Foundation.

February 2011, Dwyane Wade has been brand ambassador and his role further strengthens Hublot’s ties to professional athletics and in particular, basketball.

The One Million RMB Challenge is Hublot’s first international event linked with basketball. The choice of venue in Beijing marks the brand’s social responsibility commitment to China.

During his stay in China, Dwyane Wade reinforced his strong ties with Hublot with a visit to the Hublot Boutique in Beijing’s Wangfujing Street, New Oriental Plaza. He also attended a gala dinner with over 100 VIP guests on the terrace at the Forbidden City.