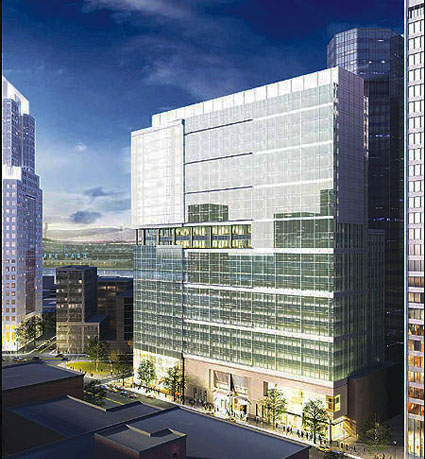 There’s excitement in the air around Pittsburgh, as the Steel City eagerly awaits the grand opening of the luxury hotel, Fairmont Pittsburgh.

The Fairmont Pittsburgh will feature 185 guest rooms, and include 12,000 square feet of event space. The hotel will offer its guests a 6,000 square-foot health club, in addition to a full-service restaurant named Habitat, with its feature bar – Andys.

The Fairmont Pittsburgh is located in Three PNC Plaza, which is the largest high rise construction project in the city of Pittsburgh over the last 20 years.

Len Czarnecki, who’s the General Manager for Fairmont Pittsburgh states, “We are thrilled to introduce the Fairmont reputation of luxury and exceptional service to Pittsburgh and pleased that Pittsburghers have already begun recognizing it as the luxury brand in the city. We look forward to sharing our enthusiasm for the city, its rich culture and its unique neighborhoods with our guests.”

The design of the Fairmont Pittsburgh continues along the city’s long history of artistic and industrial heritage with a stunning design concept that embodies both art and industry.

The hotel showcases both glass and steel elements that are prominently utilized throughout the luxury hotel. Guest of the hotel will view original artwork by local Pittsburgh artists and locally-commissioned photography can be found in guest rooms and throughout this beautiful hotel.

The size of the guest rooms are large and spacious. A double queen room is 466 square-feet, and a king room measures 424 square-feet.

From the room, guests will enjoy incredible views of the city landscape and rivers, thanks to floor-to-ceiling windows, the only of its kind in Pittsburgh. If you stay in one of the hotel’s deluxe-view rooms, enjoy even more spectacular views of Mt. Washington, the North Shore and the rivers.

Dining options at Fairmont Pittsburgh include “Andys” bar – whose name celebrates two of Pittsburgh’s most famous Andrews: Carnegie and Warhol – and Habitat restaurant, which will feature world-inspired cuisine utilizing locally-sourced ingredients. Both venues are located within the unique double-height lobby of Fairmont Pittsburgh, allowing easy access from Market Street. Andys and Habitat will serve the classic cocktails expertly crafted by Fairmont’s talented mixologists.

Fairmont Pittsburgh food and beverage offerings will be under the direction of Executive Chef Andrew Morrison. A native of Cheshire, England, Morrison gained his culinary inspiration and internationally inspired cuisine from his European training and his adopted city of Pittsburgh.