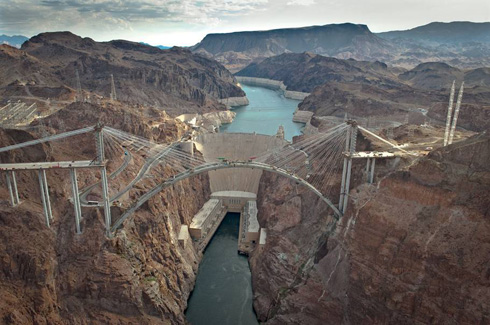 The Hoover Dam Bypass Bridge is an amazing architectural and engineering feat. The massive 2,000-foot bridge is part of a much larger project – the 3.5-mile corridor that starts in Clark County, Nevada, and ends in Mohave County, Arizona.

The bridge is inching along and moving ever so close to completion. The Hoover Dam Bypass Bridge rises about 900 feet above the mighty Colorado River. The two sides of bridge at the Hoover Dam are slowly take shape.

When completed, the bridge will carry a new section of US Route 93 around the frustrating bottleneck of the old road. The traffic jammed road currently winds around and across awesome Hoover Dam.

Link Nevada and Arizona together, the Hoover Dam Bypass Bridge is truly an incredible feat of engineering. The bridge will be supported by the two massive concrete arches which climb out of the canyon rock face.

When complete, the arches will measure greater than 1,000 feet across. 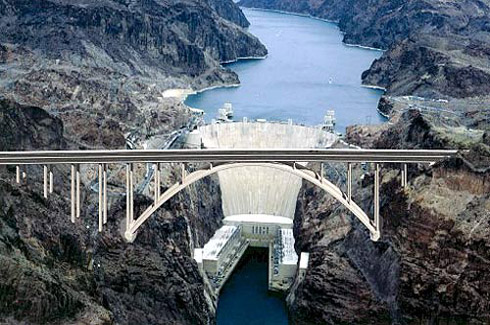 At the moment, the structure looks like a traditional suspension bridge. Once the arches are complete, the suspending cables on each side will be removed. Extra vertical columns will be installed on the arches to carry the bridge road.

Although the bridge is generally called the Hoover Dam bypass, the official name is the Mike O’Callaghan-Pat Tillman Memorial Bridge. The bridge is named after the former governor of Nevada and an American Football player from the NFL Arizona team who served in the U.S. Army, but was sadly killed in Afghanistan.