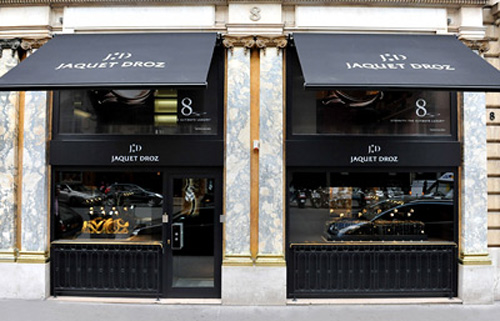 It’s been 225 years since Jaquet Droz opened its first watchmaking workshop in the French capital of Paris.

Located at 8, rue de la Paix – the new Parisian boutique is characterized by sleek lines, a palette of black, enamel colors and gray as well as contrasting matte and glossy surfaces.

Founder Pierre Jaquet Droz, was fond of Paris and he created a workshop there in 1785.

Then in the early part of the 21st century, Jaquet Droz launched the “Elegance Paris” Collection, which included luxurious timepieces that were influenced by the glamor and femininity of fine, Parisian fashion.

Jaquet Droz has moved into one of the world’s most prestigious addresses. The new Jaquet Droz Parisian boutique is just a stone’s throw from Place Vendôme.