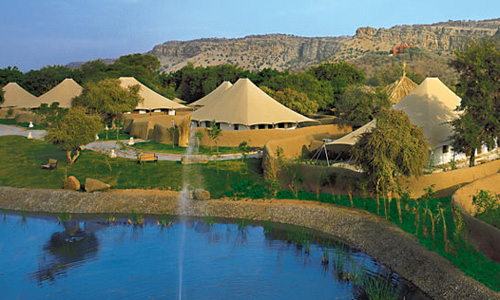 India has long been a land of intrigue and interest, but also reservation due to its large population and poverty problems.

But India’s tourism just received an enormous boost.  The luxurious Oberoi Vanyavilas hotel in Ranthambore was just voted the best hotel in the world.

Travel+Leisure magazine announced its readers’ poll and the luxury hotel Oberoi Vanyavilas, won the most votes.

The Oberoi group did quite well in the Travel+Leisure magazine readers’ poll. Several other Indian hotels that are owned by the same Oberoi group, also were voted in the list’s top fifteen.

Those properties include: The Oberoi Amarvilas, Agra, Rajvilas, Jaipur and Udaivilas, Udaipur have been ranked second, third and fourth respectively in Asia and positioned number five, thirteen and fifteen in world ranking.

Kumari Selja who is India’s Union tourism minister wrote in a letter addressed to the group’s chairman, PRS Oberoi that this prestigious award for the Oberoi Vanyavilas Hotel is the “crowning glory” of Incredible India.

The Oberoi group currently has expansion plans to open two new hotels in Hyderabad, one in Dehra Dun, a resort in Chandigarh, a hotel in Rajasthan and a 200-year-old palace in Madhya Pradesh.

Internationally, by the year 2012, the group is looking at opening a hotel in Dubai and another in Morocco.