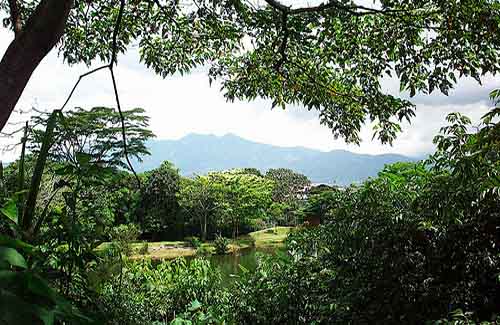 Nature Air is based out of San José, Costa Rica and offers 74 daily flights to 15 destinations in Costa Rica, Nicaragua and Panama. In operation since 2001, Nature Air also has the honor of being the world’s first certified carbon neutral airline.

The Costa Rica tour was designed along the National Biodiversity Institute of Costa Rica (INBio). The goal of Nature Air’s new eco-extensions is to showcase the resplendent quetzal during the height of its nesting season, from now through May, in a responsible and Earth-friendly manner.

Known by the ancient Maya and Aztecs to be the “god of air” and a symbol for goodness and light, the resplendent quetzal measures about 36 to 40 cm (14 to 16 inches) in length with an extra 65 cm (26 inches) in bright green tail feathers (an impressive feature that was symbolic of springtime plant growth). The bird can be typically spotted in the Costa Rican cloud forests of Monteverde, Cerro de la Muerte and five other national reserves during their nesting season.

Both packages depart from San José, Costa Rica and include ground transfers, a two-night stay in a sustainable hotel and a guided quetzal-watching tour.

The quetzal eco-extension package is the first of many new biodiversity-centric itineraries being rolled out this year by Nature Air, the world’s first carbon-neutral airline. Each has been designed with guidance from expert INBio field guides to promote hands-on learning and provide rich wildlife encounters.

– San Ramón, Alajuela – Bird lovers and history buffs alike should flock over to San Ramón, a small city located 60 kms (37 miles) northeast of San José. Surrounded by spectacular mountains and cloud forests (the ideal nesting spot for the quetzal), San Ramón is known as “the city of presidents and poets,” having been the birthplace (or home) to many well-known political and literary figures. Nature Air’s two-night/three-day eco-extension package to San Ramón includes overnights at Villa Blanca (an eco-friendly hotel that was once owned by former president Rodrigo Carazo), a cloud forest nature walk and quetzal tour, free access to the hotel’s vast hiking paths, round-trip ground transfers to the hotel from San José and breakfast each day. Package price per person is $456 (based on double occupancy; available until Nov. 30, 2012).

– San Gerardo de Dota, San José – Travellers wanting to stretch their wings in a natural setting can chirp with delight in San Gerardo de Dota, a birdwatcher’s paradise with plenty of busy woodpeckers and hummingbirds, rolling hills and picturesque fruit plantations. Nature Air’s two-night/three-day eco-extension package to San Gerardo de Dota includes overnights at Savegre Hotel (an eco-lodge set in the midst of a 400-hectare private nature reserve), a quetzal bird-watching tour, round-trip ground transfers to the hotel from San José and breakfast each day. Package price per person is $430 (based on double occupancy; available until Nov. 30, 2012).