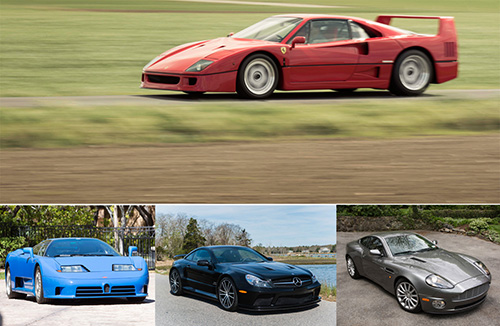 The upcoming Greenwich Concours d’Elegance auction will showcase some of the best classic cars. In addition, it’s your chance to bid on some impressive vintage supercars. Since 1793, Bonhams is one of the world’s largest and most respected auction houses of fine art and antiques, fine jewelry and of course motor cars.

The mix of modern, classic and vintage car offering will be quite contrasting. It is a perfect chance to view many high-performance cars.

One is getting the most buzz is a 1990 Ferrari F40. This classic supercar is closely associated with Enzo Ferrari, the iconic Ferrari founder. This particular Ferrari F40 is a non-catalytic converter and loaded with features. The 1990 Ferrari F40 has a top speed of 201 mph (324kmh). During it’s time, this Ferrari model was the fastest production car being produced. Even today, it’s top speed is impressive and still can beat most supercars around today.

Slightly younger, the 1993 Bugatti EB 110 will surely turn heads. The Bugatti legacy continues to live n today, but this EB 110 was first introduced in 1992. This amazing Bugatti supercar offers – high quality, world-beating performance and stunning beauty. Rather rare, only 113 were ever made. The particular model is just one of 84 GT variants. It was named both Autocar and Motor Magazine test car back in 1994.

Be sure to check out the striking 2003 Aston Martin Vanquish. This supercar offers an all-alloy V12 engine and a factory installed 6-speed manual transmission. Although just 14 years old, this Aston Martin Vanquish supercar has only 8,000 miles on her. It’s highly optioned and ready to go to a new owner. Get your chance to ride like James Bond in this classic British supercar.

Also at the auction is a 2009 Mercedes-Benz SL65 AMG Black Series. With only 9,500 miles, this sleep high performance supercar is incredible. It features a twin-turbocharged V12 engine. As a result, it produces 661 bhp. Wow! What a VIP experience it would be to drive this vehicle. Only 175 were made and exported to the U.S. Now is your chance to own it for yourself.

Bonhams offers car auctions all during the year. Make your plans to attend the upcoming Greenwich Concours d’Elegance auction or another show.

The Life of Luxury can help you locate and buy any supercar you desire. We work with a network of buyers ad sellers around the world. Read more classic car and supercar stories in this luxury blog. Hope to see you at the Greenwich Concours d’Elegance.