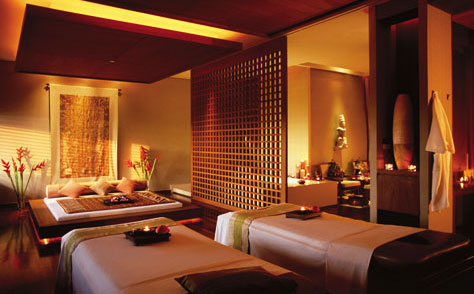 Being pampered at one of the worl’d most luxurious spas is tops on most of our wish lists. CHI, the Spa at Shangri-La, has opened at Shangri-La’s Tanjung Aru Resort, Kota Kinabalu, Sabah. CHI, The Spa is located on its very own private island,  within the resort’s luxury premises.

Designed as a secluded sanctuary inspired by the mystical legend of “Shangri-La” captured in Lost Horizon by James Hilton, CHI occupies its own private island, Pulau Bayu, which in Malay means “Island of the Breeze”.

The 4,161-square-metre spa features eight island villas, the largest in Kota Kinabalu. Each villa comes with the CHI signature “spa within a spa” concept, featuring private treatment rooms, lounging areas, steam rooms, outdoor gardens and bathing facilities. The villas are located within the island’s perimetres to ensure privacy as well as full sea views with access through its very own entrance lobby.

Three of the villas are designed for couples and measure 69 square metres with 88-square-metre private gardens, complete with outdoor bathing amenities.

The island spa also features a yoga pavilion with full views of the South China Sea and breathtaking sunsets, lush private gardens ideal for lounging or meditation, and a welcoming “sanctum” with a spa boutique.

The CHI concept was developed in collaboration with a team of recognised experts in traditional Chinese medicine and Himalayan healing philosophies. In traditional Chinese philosophy, chi represents the universal life force that governs individual well-being and personal vitality. Spa treatments and an exclusive product range have been designed based on the Chinese philosophy of the five elements, in which metal, water, wood, fire and earth are in balance with the positive yang and negative yin energy within the body. 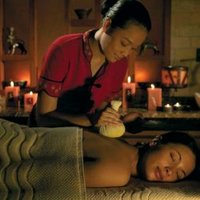 CHI Spa’s extensive menu features signature therapies like the Himalayan Healing Stone Massage and the Mountain Tsampa Rub based on the ancient healing traditions of the mystical Himalayan region, while natural ingredients like Borneo volcanic mud, Sabah pearls and cocoa find their way into a number of exclusive therapies highlighting the local culture.

Since its debut in 2004, CHI, The Spa at Shangri-La, has been recognised internationally as a world-class spa brand, garnering media and industry awards. CHI spas operate today in Bangkok, Cebu, Shanghai, Penang, Muscat and Guangzhou with a further 22 spas scheduled to open in premier city and resort locations over the next five years.
Article by: Asia Travel Tips.com