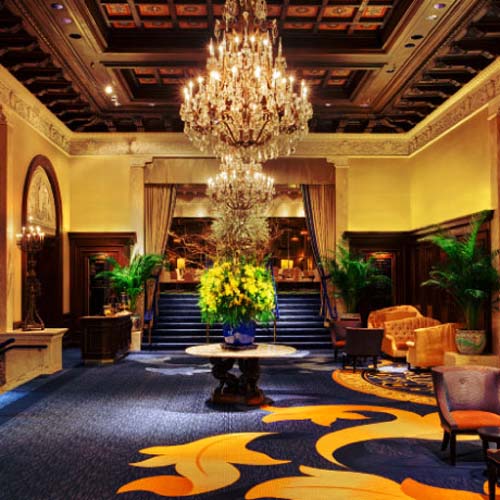 With Halloween only a week away, many of us love the fear factor of ghosts and spirits. Now you should plan a visit to some of the most haunted places.

Enjoy a memorable travel experience and stay, eat and play at bone-chilling haunted destinations. We love scary movies but it’s one thing to sit in a safe theater and acting all tough and brave. It’s quite different to spend the night in a haunted hotel. Do you dare try?

There are some terrific travel deals this year for the spooky Halloween weekend. Each year, more people want to experience a haunted experience. The thrill of terror draws many to face their fears head on.

So take advantage of visit the most haunted places some holiday getaways this year. Here’s a Halloween travel list, courtesy of Gogobot, who is changing travel planning by utilizing its own personalized tribe-based approach.

Maybe you’ll get a Chance to take a selfie with the ghost of Marilyn Monroe, or famous house known for stairs that go nowhere. Can you handle visiting or even staying in any of the most haunted places?

Enjoy some of the most haunted places and spookiest Halloween destinations:

Hollywood Roosevelt Hotel – Los Angeles, CA
The Hollywood Roosevelt is known for hosting many of LA’s most glamorous celebrities… both living and dead. Room 928 was where actor Montgomery Clift stayed while filming a movie in 1952, and where he still hangs his ghostly hat today. It’s also said Marilyn Monroe’s reflection can be seen in a mirror near the lower level elevator – perfect for an epic selfie if you can catch her in your shot.

The Drake – Chicago, IL
The “Woman in Red” is the ghost you should be on the lookout for at the Drake Hotel. According to legend, she ended her life here while attending a gala on New Year’s Eve 1920 after discovering her fiance in the arms of another woman. Her ghost is said to haunt all of the places she passed through that night: the Gold Coast Room where the gala was taking place, the Palm Court parlor where she discovered her fiance’s affair, and the roof from which she made her final jump.

Spaghetti Warehouse – Houston, TX
There’s no such thing as eating alone at the Spaghetti Warehouse. This restaurant is packed with both antiques (like eerie stained glass windows and a staircase from a European castle) and ghosts, including that of woman who who died of a “broken heart” after her husband fell to his death down an elevator shaft on the property, as well as a man who is said to pace a downstairs bathroom. If the stories are true, you may even feel a ghost tapping you on the shoulder while you dine – sit upstairs for a better chance of finding a spectral dinner date.

Peyton Randolph House – Williamsburg, VA
There have been over 30 mysterious and unfortunate deaths in this historic Colonial Williamsburg home since it was first constructed in the late 1700s, which means there are lots of angry ghosts hanging around waiting to totally creep out visitors.

Don Vicente de Ybor Historic Inn – Tampa, FL
Before it became a hotel in 1980, Tampa’s boutique Don Vincente Inn was a hospital for nearly a century. That means hundreds of people died on the site, many of whom have stuck around in spirit form. We hear room 305 is a favorite for the long-departed.

The Horton Grand Hotel – San Diego, CA
The Horton Grand is actually comprised of two former buildings that were once located in different parts of town, dismantled, and rebuilt as one hotel on the current site in the 1980s. The ghostly inhabitants include the (purportedly) friendly Ida Bailey, the owner of a brothel that once occupied the site, and Roger Whitaker, the ghost of room 309, who was reportedly shot – either by the father of his lover or by a creditor who had bankrolled his gambling habit – and killed in room 309 of one of the old buildings, and simply moved to the new location with the rest of the bricks and furniture.

Winchester Mystery House – San Jose, CA
See that stairway that leads to the ceiling? Or that door that opens onto a wall? The Winchester Mystery House is the product of the paranoia suffered by the widow of the inventor of the Winchester rifle. She feared the ghosts of those killed by the rifle would haunt her, so her building plan was designed to both appease and confuse these spirits. Visitors still report strange hauntings – we’d suggest hiding in the room with hidden doors to escape any ghosts you may encounter.

Lafayette Square – Washington, D.C.
Ghosts don’t appear exclusively in eerie spaces – some prefer to take in a little fresh air. It’s said President Andrew Jackson still takes up residence at the White House. When the mood strikes, he likes to get outdoors to take strolls through this park across the street.

Hotel Indigo San Antonio At The Alamo – San Antonio, TX
Located across from the Alamo, it should come as no surprise that the Hotel Indigo has some haunted history. The basement, where conference rooms and the gym are now located, was where a number of Alamo-era cannons were found during construction. In addition, it’s where, it is said, many ghosts still lurk.

Granary Burying Ground – Boston, MA
If you want to find ghosts, heading to a cemetery is a no-brainer. But with the number of burying grounds in Boston, you can afford to be picky. The Granary has been collecting bodies and their lost souls for nearly four centuries. Therefore if you’ve ever dreamed of “meeting” some of the most important figures in American history – from John Hancock and Samuel Adams to Paul Revere and his horse – this is the spot to come.

1886 Crescent Hotel & Spa – Eureka Springs, AR
This creepy building has been, at times, a resort for the rich and famous. Also a college, a hospital run by Norman Baker, a man named with no medical training, and, since the 1990s, a hotel. The ghosts at the self-proclaimed “Most Haunted Hotel” in America include a man who died during the building’s construction. This cancer patient roams the halls looking for her room key, two men in top hats, and a cat. You might also find yourself face to (ghostly) face with Baker himself. Plus, it’s probably best not to ask him for medical advice.

Restaurant 1833 – Monterey, CA
The building that now houses one of Monterey’s best restaurants was once the home of James Stokes. He  was a doctor who accidentally caused the death of a California governor because of a misdiagnosis.  As an investigation would later reveal, he turned out to not really be a doctor at all. Perhaps because of some unfinished business left on earth, or because of the new restaurant’s stellar food and apothecary-themed bar menu (inspired by the mad “doctor” himself). Finally,  Stokes never quite managed to leave his former residence and is available for consultations from beyond the grave.

Are you ready to celebrate Halloween and visit some of the most haunted places? The Life of Luxury can help you plan out and book your travel itinerary. Come back again to read about the best luxury travel destinations by following this luxury blog.