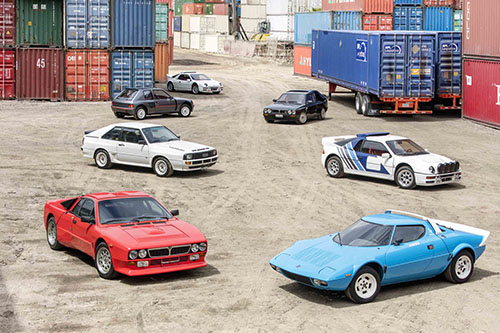 Bonhams just announced adding a very significant and highly original collection of rally cars to its mid-August sale in Carmel. The Bonhams’ Quail Lodge Auction is the place to be for car collection enthusiasts. From the estate of a prominent collector, the long term, single-owner rally car collection includes Group B Homologation rally cars from Lancia, Peugeot, Ford and Audi. Each of these classic cars will be offered without an auction reserve.

This year’s Bonhams’ Quail Lodge Auction will be held at the Quail Lodge & Golf Club. This luxury lodge is located in sunny Carmel Valley, California. Car lovers come to Bonhams annually from all around the world. Some come to buy their dream car, while others simply enjoy looking at classic and vintage cars.

Here is a summary of the Group B rally cars that will be available at the upcoming Bonhams’ Quail Lodge Auction:

1983 Lancia Rally 037 Stradale –
This too is a legendary model, known as the Tipo 151, as it won Lancia the World Rally Championship Constructor title in 1983. Employing a supercharger instead of a turbocharger to eliminate turbo lag and improve throttle response, it was also the last rear-wheel car to ever win the World Rally Championship. This example is also very original, including the interior as well as exterior paint, and has, incredibly, logged just 9,342 km (5,805 mi).

1985 Audi Sport Quattro S1 –
With its carbon-kevlar body shell and aluminum-alloy straight-5 turbocharged engine, the Sport S1 model was a force to be reckoned with and won that year’s Pikes Peak International Hill Climb, not to mention placing second in the World Rally Championships. This rally car is one owner from new who took factory delivery and, like the others in its stable, is a very original and low mileage example.

1985 Lancia Delta S4 Stradale –
The first example of a twincharged car (combining supercharging and turbocharging), this powerful and innovative model achieved numerous World Rally Championship race victories from Europe to North and South America. This specific car is also one owner from new who took factory delivery and is very original inside and out with only 8,851 km (5,500 mi).

1986 Ford RS200 –
Like its more exclusive brother, this RS200 is nonetheless extremely uncommon and represented the pinnacle of then-modern racing development. Similar to all the cars in this incredible collection, this example is in impressively original condition and like new.

1986 Ford RS200 Evolution –
Built to compete with Audi and Peugeot, the RS200 Evo was the world’s fastest accelerating car when it debuted. While 200 examples of the RS200 were made (to comply with FIA Group B regulations), only 24 of the RS200 Evolutions were built – this being one of them. In the collection since 1989, it is in like new condition.

Each of the above Group B Rally Cars will be offered without an auction reserve at the Bonhams’ Quail Lodge Auction. This incredible car auction will be occurring on Friday, August 18 in Carmel, California.

In addition, limited entries of special collectors’ cars are invited for consignment to this internationally attended car sale. Lastly, the event is hosted along with The Quail: A Motorsports Gathering. If you are interested in learning more, parties may contact the Bonhams Motoring Department.

Bonhams was founded way back in 1793. Their reputation is outstanding. The companyis quite proud to be one of the biggest auctioneers of fine art and antiques in the world!

Make your plans now to visit scenic Carmel Valley, California and attend the Bonhams’ Quail Lodge Auction. See for yourself what car lovers have known for years. The Life of Luxury offers a variety of luxury concierge services. Enjoy a VIP experience! Be sure to follow our luxury blog for more car stories.